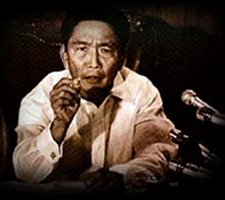 As far as I know, fate has never been kind to deposed dictators who did wrong to his own country. If captured alive after getting thrown out of power, they either rot in jail or get executed for the crimes they committed. The luckier ones may succeed in fleeing to a friendly country only to live in isolation under constant threat of getting extradited with every change in the leadership of their country in exile.

I was in first year high school when Ferdinand E. Marcos got elected to the presidency of the Philippines. Life in the rural areas in those days was not easy but it was not hard either. My late father was a tenant-farmer but we never missed a meal and I was enrolled in a private rural high school. I was not aware then of the details on how the country was doing economically nor what political plan Marcos had for himself.

In 1969, Marcos got reelected to the highest executive position in our country and it was the same year I entered college in Manila. Away from my family, I was then feeling how difficult it was for my parents to send me to college. By that time, the opposition led by then Sen. Benigno Aquino was garnering enough support for him to succeed Marcos. It was also the time when student activism was at its height and we deeply abhor what Marcos was doing to the country then.

Then came September 1972 when Marcos declared martial law in the guise of suppressing civil strife and the threat of communist takeover following a series of bombings in Manila. The declaration of martial law was initially well-received by some segments of the people but became unpopular as excesses and human rights abuses by the military emerged. Had he not declared martial one year before the 1973 presidential election where he was no longer qualified to run, I would have exercised my right of suffrage for the first time and voted for the president that I liked.

The period of Marcos dictatorship lasted until February 1986 when he got ousted by the first non-violent EDSA People Power Revolution. I consider his dictatorial rule during the martial law years as the dimmest in the history of our country and historical accounts of events during the period will bear me on this. Marcos wrongdoings is not the subject of this blog so I won’t elaborate on the subject.

The Philippine dictator died over 20 years ago while in exile in the United States of America and his body has been displayed in a glass coffin in his hometown of Batac in Ilocos Norte since 1993. His widow, Imelda, has long pushed for his burial in Libingan Ng Mga Bayani (Philippine heroes’ cemetery) which is reserved for presidents, soldiers, statesmen and national artists.

The hero’s burial for Marcos is being opposed by pro-democracy and left-wing groups who say the late dictator committed massive human rights violations and plundered the nation’s coffers during his two-decade rule. As the country’s chief executive tasked to decide on the issue, Pres. Benigno Aquino III, whose father suffered death during the dictator’s reign, said no to burial with state honors for Marcos during his term of office.

Our president said it would be unjust to allow Ferdinand Marcos to be buried with state honors when thousands of human rights victims during the former dictator’s reign have never received any apology from the late dictator’s family. I say NO to honoring the late Philippine dictator. What is your take on this issue of honoring Dictator Marcos?