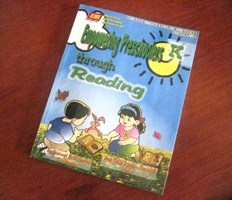 Today,we often hear Filipino children speaking in English but I wish to say that they still belong to the minority of our young population. While English is the language of business and governance, Filipino is still national language in the Philippines. I am not saying that Filipino is the native tongue (natural language) for all of us because we speak different languages (also called “dialects”) in various parts of our country as in Tagalog, Ilocano, Cebuano, Ilongo and many others. The English that some children speak are taught to them either by their parents or in the pre-schools that they attend.

Depending on the status of their families, some children as young as two-year old are enrolled in pre-schools (nursery schools) where English is the medium of instruction. Beginning this school year (2011-12), all Filipino children are required to undergo Kindergarten education before they could be accepted to Grade 1 at the age of six. Having not seen a public Kindergarten class in session, I do not know if English is the medium being used. I would presume that the native language in an area is the one being used by the Kindergarten teachers in public pre-schools though I could be wrong.

In your case, when are you taught to speak and write in English? In my talk with people of varying ages, I came to learn that different generations in the Philippines were taught the English language at different ages depending on the school system that they went through. Members of my generation (50 years old and above) and those immediately after us started to learn English when we were at Grade 3. In our first and second year in the elementary school (Grade 1 and 2), we were taught how to read, write and count in the dialect of our place of birth. In my case, Tagalog was the exclusive medium of instruction when I was in Grade 1 and 2.

Today, as the guardian and tutor at home of our four-year old grandchild enrolled in a private pre-school (Kindergarten class), I know that she is being taught how to read, write and count in English although she also has lessons in Filipino. In her first year at a different private pre-school, she underwent pure English instruction so I can understand her confusion when we are doing her homework in Filipino. She would always identify the picture of an apple as “apple” and not “mansanas” as it should be when she is doing her Filipino lesson. I wonder if the situation would do her good in learning efficiently how to read, write and count. What do you say?

Our greatest glory is not in never falling, but in rising every time we fall.
Confucius