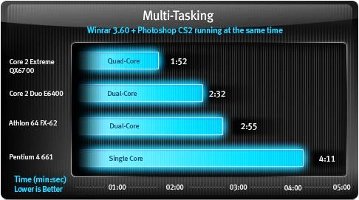 What do you answer when someone asks you what kind of personal computer do you have? Chances are you will reply with Pentium 4, Dual-Core, Athlon, Phenom and other brand names plus the processor speed of your central processing unit (CPU) in Gigahertz (GHz). So if you ask me with the same question, my answer will be “My computer is a Pentium 4 – 2.4Ghz”.  With such a reply, you may conclude whether or not my computer is slower or faster than yours by just comparing their GHz processor speeds. The higher the GHz figure, the faster the computer will be. Correct? I say YES if you are comparing both old computers and NO if you are comparing them (the old ones) to the computers of today with multiple-core processors.

Gigahertz is the measurement of a processor’s performance which quantifies the number of data cycles a CPU can complete per second. Nowadays, GHz rating is suggested not to be used alone to fully compare one processor’s performance against another. For example, an Intel Pentium 4 at 2.66GHz will not outperform an Intel Core 2 Duo at 2.0GHz. This is because all Core 2 Duo CPUs are dual-core, allowing them to basically double their workload rate, even though they are working at a slower core speed. More confusing would be to compare the processing speed of AMD with that of Intel’s basing on GHz ratings alone.

I stated above that it is a usual misconception to conclude that processor speed or its GHz rating dictates a computer’s performance  level; the higher being better. For example, people think an Intel Celeron 2.6 GHz is faster than a Core 2 Duo 2.0 GHz. Another is that people think a Celeron 1.8 GHz is faster than a netbook or a nettop using Atom 1.6GHz processor. Under the current platforms at which the processors are being built and applied in different applications, the GHz ratings of current processor brands and models can no longer be used solely to conclude which ones run faster compared to the others.

Mr. Jerome Matti, Marketing Manager of Intel Philippines said in a recent press release – “Processor performance has to be based on what the user wants. There are users who only surf the Internet so it’s better for them to have a basic processor. Some do basic editing. There are those who do a lot of multimedia creation. Gamers and 3D graphics designers demand the best performing processors.” Other devices also affect a computer’s performance such as the memory, the motherboard chipset, hard disk drives, and the graphics adapters so the choice of the processors alone to achieve speedier performance no longer apply nowadays.