Wishing For Chrome OS To Be …

After the official announcement by Google that it will come out with its own computer operating system which would be open source, quick, light-weight and tailored for a “cloud computing” trend of offering applications online as services, isn’t ... read more 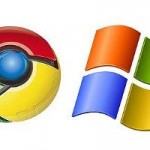